Campaigns like this can expect tons of viral buzz and earned media because of their creativity: It’s not anymore commercial, but a piece of art to share with the audience! 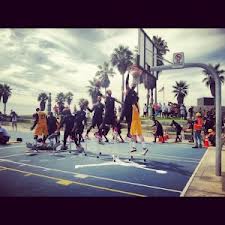 Chris Paul bursts out of a concrete wall filled with shoe boxes, passes the ball to himself, knocks over a cyclist, makes some woman spill her coffee, sits for a caricature artist, upsets what appears to be an applecart (we told you not to do that, Chris!), passes to himself again after leaping off a wall, charges through wet concrete, ducks past the point guard, bounce passes the ball (to himself, of course) so hard that he breaks the blacktop, and slams home a backboard-shattering dunk.
Sort of. What he actually does is probably jump rope somewhere or go to the movies while a bunch of guys who look like him, in Chris Paul jerseys, stand perfectly still next to each other, each moving slightly forward in a chain of events so the next human statue appears to be about one-tenth of a second in time past the guy before him.

This is a great spot. Shot by Wieden + Kennedy in New York on Venice Beach in Los Angeles, it’s for Nike’s Jordan Brand—specifically, Paul’s new CP3.VI shoe. It probably cost a hell of a lot more to do the whole two-and-a-half-minute presentation as practical effects than it would have to make a CGI short with the actual Chris Paul doing everything depicted here. Wouldn’t be nearly as cool, though. (Well, unless it were a masterpiece like Jonathan Glazer’s 1996 “Frozen Moment” Nike ad with Michael Jordan, which seems to be the inspiration here.)(www.adweek.com).

Other works include of a television advertisement for Coca-Cola (music by Jack White) directed by Nagi Noda a Japanese pop artist two years ago.