While some brands are still learning how to use social media, a few have already found that Twitter is an incredibly important customer relations management tool. How they manage their Twitter audience or increase their customers base? With more than 300 million user accounts, Twitter has become an important network for companies to leverage in their communication plans.

Why brands should love twitter? According to Compete, two of the top reasons Twitter users give for following a brand are special offers (94%) and exclusive content (79%).

The deal
They used Promoted Tweets in timelines to announce an exclusive Twitter deal for $49 chinos pants, which were normally priced at $88. The private deal was only available through Twitter and not advertised anywhere else on Bonobos’ website. Bonobos encouraged customers to spread the word and unlock the deal by retweeting the “Twixlusive.” After a total of 49 Retweets, the sale would then go live.
The results
The deal unlocked almost immediately with more than 80 Retweets in about 8 minutes. Their built-in customer base of Twitter followers was extremely receptive to the sale but they also targeted users who had similar interests to their followers. That strategy helped them get nearly 100 first-time purchasers.
In addition to acquiring new customers, the campaign drove tremendous sales results:

1,200% ROI in 24-hours
13 times more cost effective (CPA) to acquire a new customer from Twitter than from other marketing channels

Like the global brand Starbucks (one of the most engaging companies online) who with more than 1.5 million followers could tweet all day about nothing but their own products. But instead, they have fun with their followers, tweeting things such as “This weekend is supposed to be amazing, enjoy!”. They also host polls and contests and share lots of pictures and videos. The offline Starbucks Culture has taken to the airwaves of the Internet and Social Media.

The results
If you head over to their Twitter page, you will see an @ sign in front of every single tweet. Starbucks’ strategy is one where they would rather reach out and connect with each and every follower on a personal level; then spam their audience with advertising messages. A strategy that most brands don’t follow online. By upholding this standard, Starbucks has been able to create an online personality that people can connect to and therefore has been utterly successful with its online campaigns.
Twitter also helps maintaining relationship between Starbucks and customers because they could communicate one on one instantly. This can be incredible beneficial for both Starbucks getting feedback from customers and customers knowing promotions, awards, sales about Starbucks.
The bad buzz
On July 16, a mishap bodied has plunged the famous American chain of coffee lounges in unprecedented embarrassment in Argentina. The reason: a tweet that struck awkward pride « gaucho » and triggered a bad unprecedented buzz on social networks Argentina. More information: thenextweb.com

In other ways, Dunkin’ Donuts twitter stream looks like the best digital carnival ever: Non-stop trivia, prizes and fun. 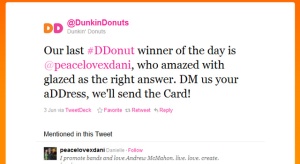